Our wonderful Lord inspires us in many ways.

The Lord has used Jose’s story to birth a special mission, called “Operation Jose” here in the United States which provides Bibles for those in the Amazon of Brazil who have never had one. We encourage you to read Jose’s story below and become a Missionary yourself. Doing so is as easy as sharing the Word of God with someone in the Amazon this Christmas via a Bible.

The Lord has used Jose’s story to birth a special mission, called “Operation Jose” here in the United States which provides Bibles for those in the Amazon of Brazil who have never had one. We encourage you to read Jose’s story below and become a Missionary yourself. Doing so is as easy as sharing the Word of God with someone in the Amazon this Christmas via a Bible.

Three mornings a week in the Amazonian “M” community I hold a Bible study for the youth aged 12 to 15. As a “prize” for completing a full Bible study course with me the youth get to pick out a new shirt or new pair of shorts from the prize box. This is incredibly meaningful to the students because kid’s clothing in the Amazon is ragged and worn as it has literally been passed down from 5 to 13 siblings.

A few weeks ago 3 youths completed a full course and got to go to the prize box to claim their choice of clothing. Their faces lit up as they approached the box. From the way they treasured their prizes you would have thought I had just given them a new royalty wardrobe.

A little after dark that night I heard a faint knock at my door. It was Jose, a 12 years-old male, who had acquired a pair of shorts from the box that day. Though proud of all the youth, I was especially proud of little Jose because he comes from one of the poorest families in the community and he has a severe learning disability. With excitement and courage, Jose voluntarily read aloud during our lessons and persisted through to complete the first Bible study course.

With his shorts under his arm, he shyly said, 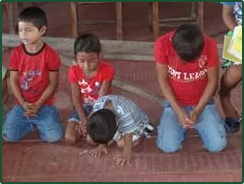 “Missionary, I, ummm…” (his head dropped), “I was wondering if I could trade my shorts?”
“Absolutely, Jose. Would you like a shirt instead? I have red and black,” I replied.
“No, no, no,” he sadly remarked.

And then, as he humbly held out his shorts, the most prized possession that he has ever owned in his life, he said,

Talk about trying to hold back the tears and pull it together to even get a word out! My eyes swelled with tears as I responded,

“Jose, you may keep your shorts and the next time I am in the city I will get you a Bible of your own.” 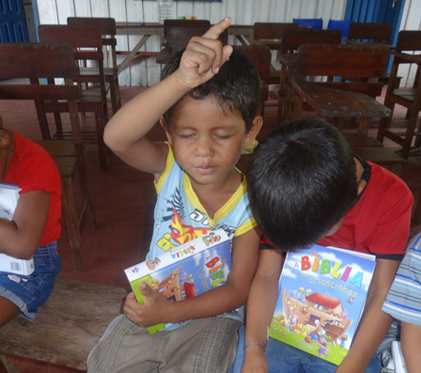 Jose was introduced to God and studied the Bible for the first time when he started the youth Bible study course a few weeks ago. Because of his low education level, I really wondered at times if he understood any of what he was reading or hearing… but apparently, he was. He understood enough to know that he wanted a Bible of his own to continue his studies of our Beloved Jesus, even when we didn’t have class.

Since January of 2012 Jose’s community has had a self-sustaining church of over 60 members and 2 trained pastors (from the community). The church has helped us evangelize and plant churches in multiple other Amazon jungle communities; but we lack one thing. Like Jose, we have a jungle full of spiritually hungry people but they lack access to Bibles in their own heart language. This Christmas, you can help us change that for them!

I will soon be heading back into the jungles of the Amazon of Brazil and would love to take you with me, via a Bible. Twelve-year-old Jose offered to trade his most prized possession for a Bible. What would you be willing to trade to provide a Bible for those just like him?

Put A Bible In The Amazon

Bibles are $15 each and range from illustrated Bibles, to teen study Bibles, to large print Bibles, along with other literary options including our new InTouch Ministries Solar Powered Audio Bibles.

We invite you to make your tax-deductible donation by mailing a check to the address below, or you can make a donation securely online via credit card, debit card, or Pay Pal.

Click on the button below to make a secure donation via Credit Card, Debit Card, or Pay Pal.

Donations through check can be made out to Stand Out Ministries and mailed to:

Help us accelerate our mission of loving hearts back to life